Dark Goddess of the Week: Medusa 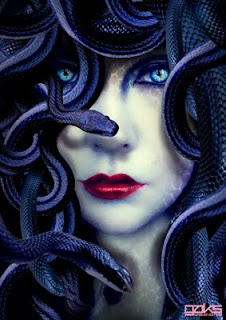 “I saw you once, Medusa; we were alone.
I looked you straight in the cold eye, cold.
I was not punished, was not turned to stone.
How to believe the legends I am told? . . .
I turned your face around! It is my face.
That frozen rage is what I must explore –
Oh secret, self-enclosed and ravaged place!
That is the gift I thank Medusa for."
-May Sarton, The Muse as Medusa

I have always been fascinated by snake goddesses.  Having four pet snakes I suppose this is not too surprising.  From the Naga Kenya of India, Medusa and the Erinyes of Greece, to the serpent that tempted Eve, snakes have played a vital role in mythology.  Although with the influence of Christianity they are now connected to sin and evil, in earlier times they were symbols of rebirth, power, and wisdom.  They were also the faithful companions of the dark goddess.


Whether you love them or are scared of them, watching a snake shed its skin is fascinating.  Its skin becomes pale, its clear eyes become glassy and opaque.  Then slowly it peels its old self away, revealing new vibrant skin.  The snake symbolically dies and is reborn over and over again.  It knows change is necessary, and that we die and are reborn many times within our lives, before true physical death claims us.  While snake venom can kill, the snake only uses it to eat or for self defense.  Almost all snake bites are caused by humans not watching their step and startling the snake.  The snake teaches us discernment.  To strike, and use our power, only at the appropriate time.  Venom while deadly in many cases, is also used to save lives and create antidotes for snake bites, teaching us that sometimes something destructive can also help heal us.  With their connection to death and rebirth it is no wonder the snake has become the companion of the dark goddess, who embodies similar traits.


In Greece the snake is found wherever we find the dark goddess.  They were one of the animals associated with Hecate, goddess of the crossroads and underworld.  In her more terrifying incarnations she was the Erinyes, three sister goddesses with wings and snakes for hair, who punished those who committed crimes.  Like Hecate, the Erinyes were connected to the underworld.  They dwelt in Hades, only leaving the land of the dead to bring justice to murderers, and those who committed crimes against women and children.  At times they drove their victims mad.  If their target died without expressing remorse the Erinyes followed their spirit until he or she showed remorse for the crimes they committed.


The Gorgon Medusa is perhaps the best example of the merger between goddess and snake.  The Gorgons were the daughters of the sea god Phorcys and Ceto, whose gaze could turn men to stone.  While her sisters Stheno (forceful) and Euryale (far roaming) were both immortal, Medusa was subjected to mortality.  Because of their legendary gaze images of the Gorgons were often carved into homes, public building, and temples as a form of protection.  Like the gargoyles that would later decorate cathedrals, their frightening forms were thought to scare away those of ill intent.


Some myths claim Medusa was beautiful once, her golden locks and charms catching the attention of Poseidon.  She also vainly thought her beauty to rival that of Athena.  Unfortunately her beauty gets her in trouble.  In some versions the sea god is so enamored with her that he rapes her, in others she is Poseidon’s willing lover.  Either way the couple had the misfortune to give in to their desires in Athena’s temple.  Enraged the virgin goddess cursed Medusa, transforming her beautiful hair into writhing serpents.  Later Athena sent the hero Perseus to kill Medusa.  When he cut off her head the hero Chrysaor and the winged horse Pegasus sprang to life from her blood, as she had been pregnant by Poseidon prior to her transformation.  Eventually Athena would mount Medusa’s head on her shield (or in some version on her breastplate).  Athena also was said to have given a portion of Medusa’s blood to Asclepius (the god of medicine) who used it to both cure illness and cause death.


Most likely Medusa was Athena’s “darker” aspect.  While Athena represents the chaste and rational side of the goddess, Medusa embodies her sexuality and her destructive side.  She is in a way Athena’s shadow self.  It seems no accident that she blatantly makes love within Athena’s temple.  As a virgin goddess, Athena to some extent is suppressing her sexuality, while these impulses are played out in the uninhibited Medusa.  Ashamed of these desires Athena views her other half as something ugly and vile, and thus Medusa is transformed.  By sending Perseus to kill Medusa, Athena is in a way attempting to defeat she shadow self, to purge herself of her inner darkness.  Athena’s connection to snakes in her myths are also hints to the fact that they are two sides of the same goddess.  Along with the owl, snakes were also one of Athena’s sacred animals.  In Orphic poems she is called “la serpentine”, and she is accredited an “unwavering” or “unblinking” stare, not unlike Medusa’s stony gaze.  In battle she could also take on the Gorgon’s terrifying appearance, presumably because Medusa’s head was mounted on her shield.  In a way placing Medusa’s head on her shield is a sign that Athena, after confronting Medusa (via Perseus) has merged both of her “selves”.  With the Gorgon on her shield, in battle she can appear as either the goddess of wisdom or the fierce snake haired goddess, suggesting she has become whole.
Medusa may have been ugly in Athena’s eyes, but her only sin is giving in to her own desires and passions.  She sees no need for modesty, recognized her own beauty and declaring it as divine (by claiming to be more beautiful than a goddess).  She is comfortable with her sexuality in a way that Athena is not, boldly displaying her lovemaking in Athena’s inner sanctum.  Medusa, although she is punished for it, lives freely without the constraints of others.  As two side of the same goddess, it is Athena who is in denial of Medusa’s power.  Medusa represents the inner power Athena is afraid to accept.  Whether it is because of social morays or fear, we at times do the same thing.  We deny our own sacred natures.  We try to fit in, we give our power away to others.  But eventually we must embrace our own darkness.  We have labeled our inner power and desires as something dark, we have cursed this aspect of ourselves as Athena did, instead of recognizing its beauty.   But it is only when we learn to embrace this part of ourselves, and like the snake shed our fears and inhibitions, that we can become whole.  When we gaze into Medusa’s face, we see our own.  And like Athena, when we truly embrace ourselves for who we are we become an unstoppable force in the world.
Posted by Stephanie Woodfield at 12:16 PM 2 comments: