A Divine Who-Ha Does Not A Moon Deity Make: Or Why the Morrigan is not my Moon Goddess 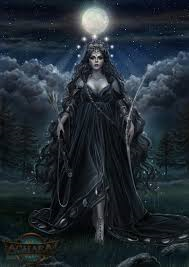 Let’s just file this under pet peeve.  Because there are far better myths and modern misunderstandings to dispel about the Morrigan, like how she is not a sex kitten, not a goddess of sex, or a declawed war goddess. One of which you can find in a blog Morgan Daimler wrote: The Morrigan is Not My Sex Goddess.  But because this keeps cropping up and because a whole lot of people ask me about it or use it as a reason to conflate the Morrigan with other Goddesses I feel it’s worth addressing, at least in a blog post.


The Morrigan is not a moon goddess.


She never was, never has been.


And probably a lot of other goddesses you are calling moon goddesses aren’t really moon goddesses either.  Moon does not instant equal feminine any more than solar instantly equates to masculine.  It does in some systems and pantheons, but not all, and not even the vast majority.  I wrote a whole book about the solar feminine and why we need to stop putting our ideas of masculine/feminine and moon and sun into strict little boxes: Drawing Down The Sun.  Or current mindset is the result of the view points of those who pioneered the study of comparative mythology, namely that everything must be held up to the standard of Greek & Roman mythology and everything else was deviant. As well as some of those very binary view points making their way into modern psychology, like the works of Jung, which modern occultists tend to be a fan of and apply to things that they probably shouldn’t apply them to.


Just because the Morrigan is female doesn’t mean she is instantly connected to the moon. The Irish didn’t really have Gods that fit the pattern of Greco/Roman pantheons where there were clear solar/lunar deities.  Seeing how often you have a sunny day, or see the sun shining without cloud cover in Ireland, I am not surprised. And if there are any deities in the Irish pantheon that could be considered for the title of lunar deity, all the ones that come to mind are male.


But the Morrigan is a triple Goddess, you say, like the phases of the moon! The concept of maiden, mother crone that we connect to the moon’s waxing and waning is a concept you can thank Robert Graves for in his book The White Goddess.  And yeah there are places where that model works, but in the Irish pantheon it doesn’t. Just like with the triple Brigid’s the three Morrigans are more like sisters than maiden, mother, crone. They are different aspects of a greater whole, or from another view point a triple set of sisters given one title who may not even be a unified being. So to connect the Morrigan to other lunar Goddesses based on the idea that she appears as a maiden, mother and crone trio doesn’t work either.
So why do suggest working with her, or guises of her, during different moon phases, you ask? Well because the moon and her cycles, as well as the sun and planets in their dance around the universe, can be harnessed for magical purposes.  Working in conjunction with these energies and these cycle can result in some pretty successful magick.  And harnessing and aligning our work to that is always a good idea.  So it really doesn’t matter if I am working with the Morrigan, Oya, or an angelic intelligence, there will always be a preferable time to do certain work based on those heavenly bodies.
So please. Stop calling the Morrigan a moon goddess. And really look at the myths and attributes of other Goddesses too. A divine who-ha does not a moon deity make. Maybe look up the myths of some moon Gods to get some perspective. Rethink what you classify as relegated only to the masculine and feminine.  And don’t try to fit the Gods into boxes, they are far too old and vast to fit easily in them.