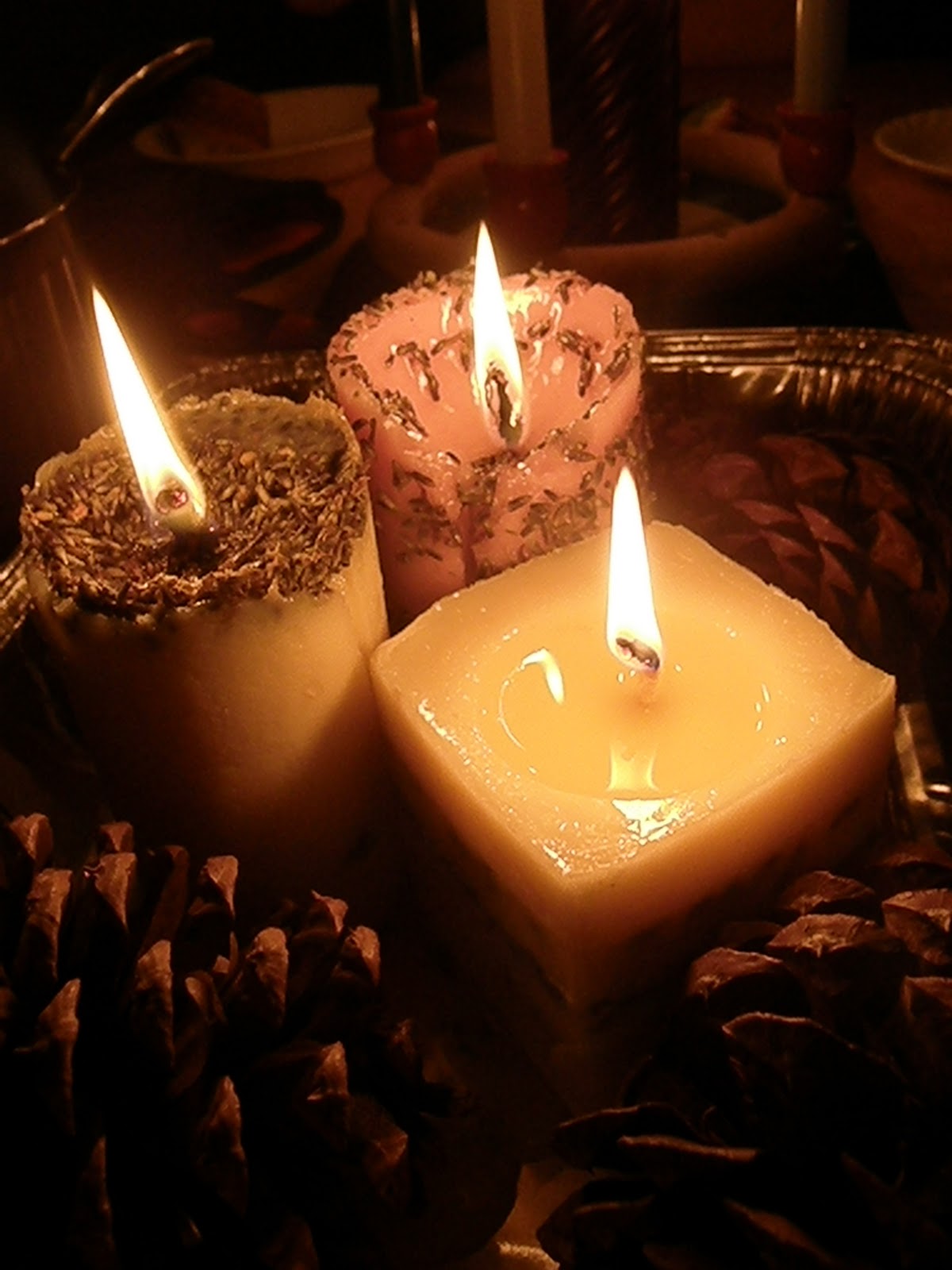 Although I work with Morrigan the most in my practices, Brighid is a close second.  Imbolc is usually a time to honor Brighid for me, but the following ritual was inspired by an experience during a meditation several years ago just prior to Imbolc.  Before most of my seasonal celebration I will sit by my altar and meditate.  I open myself to the universe and ask to be guided towards the work I should do or the energy I should center on during my ritual.  So as I breathed in and centered what came to me was music.  This is not a norm for me, usually my pathworking and meditations are very visual.  I felt as if I stood in the void, dark, but comforting like standing in the womb of the universe.  I could both hear the music and feel it moving and vibrating through me.  Then I saw two women standing in the darkness with me.  They stood facing one another with their arms raised up.  On one side Morrigan stood garbed in a cloak of black feathers, her hair black and simmering like raven feathers.  Opposite her Brighid stood regal with flowing red hair with golden threads braided through it.  They sang and as they did the sounds became visible.  It appeared as radiant light, twining, and weaving together into knots akin to the beautiful art work decorating Celtic tombs.  It was more than a song, it was as if it was the threads that wove the universe together, only those threads were sounds.  I could feel I was part of this song, existing both within and without it.  It moved through me and through all things, binding the world together.


While we know Brighid as a goddess of poetry, we often forget that Morrigan is called a poetess several times.  In one version of her first encounter with Cuchulain she first tells him she is a poetess, and recites an epic poem that she claims she was awarded a cow for.  Her famous prophesy spoken at the end of the Second Battle of Mag Tuired is poetic in nature, and often in Celtic mythology poets act as prophets and vs versa.  It’s a side of the Great Queen we don’t often consider, but it’s there.


So this is the image I keep in mind when I do this ritual.  That image of Morrigan and Brighid singing the world into existence, giving it form and shape.  While both Goddesses appear both old and young and fill many roles in their mythology during Imbolc I honor Brighid as the lady of spring.  She ignites the fire within, and as the radiant sun she warms the earth and brings us into the bright half of the year.  Morrigan on the other hand is the strength that leads us through the dark.  While Brighid is the bright flash of light and fire, Morrigan is the steady hand that keep the dying embers alive during our darkest hours.  So this time of year I honor Morrigan in that capacity.  For leading us through the dark, for strengthening us and tempering us for Brighid’s bright presence.


Part of this ritual is a descent into the underworld, where an item of cloths or jewelry is shed at each quarter.  There are many ways to approach this.  Shedding all cloths is fine, as standing naked in the underworld is very symbolic.  Often this is not pratical, whether this is because of the nature of a group setting, or if you practice outside and may be interrupted by neighbors who will be quite startled at your appearance, or if you are outside and well the weather is just too damn cold for such things.  In these cases I wear extra clothing and jewelry, a shawl or cape, jewelry that holds significance to me, and intentionally shed particular items at each quarter.


Cast the circle in whatever manner you like, or not at all, as it is not absolutely necessary.

Stand in the east, say:


Sing to me your song,


Of battles yet won,


Of victories to come

Stand in the south:


Stand in the west:


Mother keening for a son,


lost to the shadowed lands


Ladies of ford and well,


Guide the spirit, sing your spell


Stand in the north:


Standing stones and the blood of fallen men,


In the oak grove Bride’s fire the priestesses tend

Return to the altar.  Light the candle representing Brighid, saying:


Brighid I call you name!


The hammer that strikes the soul,


The flame above the head

Light the candle representing the Morrigan:


Keeper of the dead,


Flame in the dark,


To whose shadowed lands we all must tread,


You whisper to the heart of victory, strength, a summer without end


Take a few minutes to feel the Goddesses presence and listen for any wisdom or inspiration they might impart on you.  When you are ready begin walking around the circle counter clockwise.  Begin in the east.  As you travel from quarter to quarter take a piece of clothing or jewelry off.  See yourself descending into the dark.  You can see it as the underworld, or a cave.  As the Morrigan often travels between worlds through sacred mounds, and they were considered entrances to the Faery realm and the realm of the dead, I like to see myself descending into a sacred mound, and being lead deep into the earth through a stone hewed passage.  If a different image comes to mind, don’t worry, go with what feels right.  If in a group setting, or if shedding cloths is not practical, you can simply walk from quarter to quarter keeping the visualization in mind.  When you have visited each quarter return to the altar.  Bring to mind all the lessons you have learned during the dark half of the year, or things you wish to shed or transform in your life.  Remember the underworld is the womb of existence, it is the place to break down the barriers that bind us and build them anew.


When you feel ready say:


Morrigan, light in the darkness


Poetess singing and weaving all into existence,


All that is and will be,


Binding and unbinding the dead


Lady of mist and shadows

Ask Brighid and Morrigan to help you transform your life, to temper and shape you in the coming months.  Feel yourself filled with the light and strength of both goddesses, until you glow with strength and power.  When you feel ready walk clockwise around the circle.  If you took cloths/jewelry off put it back on, as you visualize yourself ascending from the underworld or sacred mound.  Return to the center of the circle and say:

The seasons shift from dark to light


I have tread through the dark, the Raven Queen at my side,


I have haunted the hollows of the underworld


As light returns to the world I transform


I rise anew, tempered in shadows, reborn of flame

Thank the goddesses and make any offerings you wish.  When you are ready go to the east, south, west, and north saying:

Queen of Shadow, Lady of Flame


I honor you in deed and name!

Extinguish the candle and close the circle.