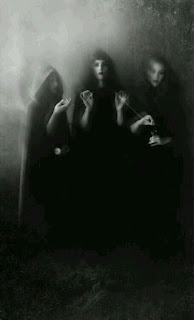 When I teach I often emphasize the importance of divination. It’s a tool we should be using all the time not just when we want to see what our love life is going to be or if we are going to get a job etc.  I use divination when I have specific question, but those cases are in the minority. Usually what I use divination for is planning a ritual or spellwork. Is this a favorable time for this ritual etc? Is this what the Gods want, or are they asking something else from me? Have the Gods accepted my offering? And so on.  Although I am not a member of ADF, I have always admired that they use divination at the end of their rituals to determine if the offering they have given the Gods were accepted, and any messages from the Gods. Why don’t we see more of this kind of divination?

In addition to all that there is another sort of divination that I find I often use, something I call divining the chaos. In a way it could be seen as simply paying attention to omens, but I find it is more subtle than that.  Most of us are accustomed to doing divination with a set of card, runes, bones etc. There is a physical, tactical component to it.  We don’t get into that state of Seeing unless we have our tools in font of us.  I personally use bird divination a great deal, which requires nothing more than being observant of the world around us and being open for the answers it wishes to give you.  Perhaps that is one of many reasons I find divining chaos to be just another intuitive step.

So what is divining chaos anyway?  Well basically its paying attention to the chaos and events that unfold around you.  Here are a few examples.  During a big ritual at an event I run we had all but two of the main people hosting one of the rituals have something come up where they could not be a part of it.  We have three big rituals at this event, and the first two went on without a hitch. But the closer we got to the last ritual the weirder things got. The first thing, which should have been a glaring stop sign to me, was that the bag with items we were going to use during the ritual was the one bag that didn’t make it to the event. It was all packed and ready to go, sitting on the couch and in plain sight. How I didn’t see it when I did the final “we got all the things” check before we left I have no idea. Still I planned to just carry on and adapt.  Then one person who was involved in ritual has a family issue and let me know they would have to leave a little early on the last day of the event, the day of that particular ritual of course.  Then the next key person bowed out, they had been up too late doing some intense work with some folks the night before.  All good reasons, all part of the chaos of running an event.  It comes with the territory.

So basically about a half hour before ritual I was left with myself and two other people and no way of doing the ritual we had originally written.  A few years ago I probably would have been in full panic mode.  Instead I sat next to the ritual fire and listened.  I was remarkably calm.  Then I planned out a completely new ritual in my head and that what we ended up doing. And you know what? It ended up being exactly what we needed.  The ritual I ended up writing in my head in five minutes had elements that had profound messages to some folks, all elements that would not have been in the ritual if I just chugged on and stayed the course I had originally plotted out.  One person told me afterwards that they had been given a very specific message that when they received a specific item in ritual it would be time for them to continue on their path, and because the other tokens I had originally envisioned were left at home, I ended up using the item they were told to look for.  Another person had been having an initiatory experience all weekend and was having misgivings about moving on from a dedication from one deity to another.  The deity they were moving on from was the one I ended up focusing on in the ritual. My original ritual had little to do with that deity and focused on other ones. Afterwards they said they had the closure they needed and felt love and acceptance from the deity they were moving further away from in their practice.

The point of course is that there are messages in the chaos. They are there, we just have to listen, to read their meaning so that we can change our course of action.  If I had just stopped and listened when I forgot my bag and just changed the ritual at that point, I doubt all the other chaotic coincidences would have happened.

Another more recent occurrence of divining the chaos happened where someone who was originally supposed to facilitate a ritual I was involved in ended up having some chaos happen at home.  In the end they ended up being a participant and receiving the messages they needed rather than being the one facilitating and giving the messages to others.  In the end it was exactly what the Gods wanted it and needed it to be.

Divining the chaos instead of just trying to side step it can be invaluable.  It required that we stop, take a breath, and ask what are the Gods telling me?  Where are they pointing me?  We like to think we have everything mapped out, that everything will go as planned, but that’s not how life works.  That’s not how the Gods or the universe works. There is meaning in the chaos, and sometimes it leads us exactly where we were supposed to be in the first place.