The Finest of Wolves 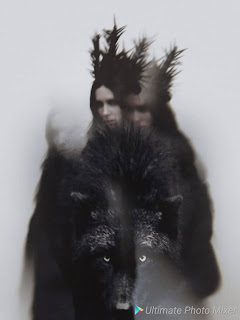 "I will break thee against a green stone of the ford;
and thou shalt have no healing from me, if thou leavest me not."
"I will in truth be a grey wolf against thee," said she
-          Tain Bo Regamna
In both the Cattle Raid of Cooley and the Tain Bo Regamna the Morrigan and Cúchulainn have an exchange where she promises to come against the hero in different animal forms, and he in turns promises to deliver his own attacks. One of the shapes she takes is that of a wolf. While most are familiar with the Morrigan’s connection to crows and ravens her connection to wolves has a particularly important connotation for me.  There is a personal meaning behind it, and one that is often on my mind.
In 2014 I was teaching at a conference along with my friend and fellow Morrigan cohort Morgan Daimler.  A few of us were splitting a hotel room for the conference and one night while decompressing in the hotel room we were out of the blue given a very strong message from the Queen.   If you are familiar with channel work you might already know that if a deity needs or wants a message to come through, sometimes there is very little you can do to stop Them. This was that kind of unexpected message. And a message that has guided a number of my decisions, and approaches to community, since that night.
I was not the one who channeled the message but I share it here with Morgan Damiler’s consent, as we both feel it is something important. Part of the imagery she saw was devotees fighting like dogs over scraps of bones while the Queen urged that She wanted wolves, or hounds, who perhaps where not quite a pack but at least ran in the same direction and not against one another.  Afterwards she saw those wolves going off into all the directions of the globe, accomplishing their own work and purposes.
"My followers are headstrong proud people. They are strong willed. This is good. But nothing is accomplished when all fight among themselves like dogs snarling over a bone. To achieve anything of worth you must find common ground and seek what unity can be had in diversity. I would have a hunting pack fit to take down any prey, not feral hounds fighting over scraps."

Posted by Stephanie Woodfield at 4:43 AM 4 comments: